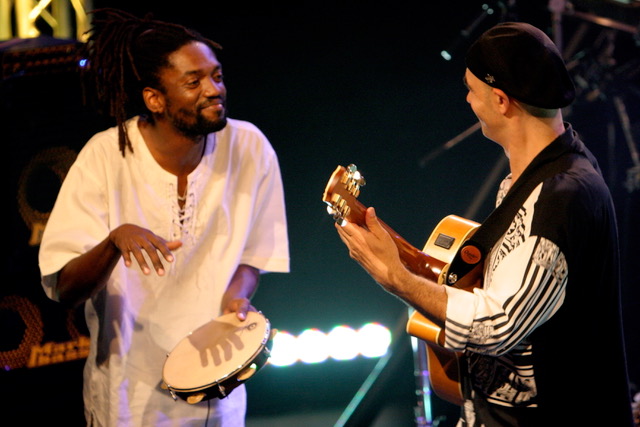 
ANTONIO FORCIONE
Antonio Forcione Multi award winning Guitarist-composer.
Recorded twenty album in his name, is an world-renowned virtuoso head of this game not just in playing the acoustic guitar, but composing. His musical influences are from the world around him;latin, jazz, flamenco, folk, classical, while his shows are packed with originality, craftsmanship and passion. He’s played with all the big names in jazz/world and opens at the major jazz/world/guitar festivals around the globe.


ADRIANO ADEWALE
Brazilian percussionist Adriano Adewale is a versatile musician and performer, known for his unconventional and exploratory approach to music, and for his ability to create magical soundscapes from the seemingly banal. In April 2000, Adriano moved to the UK, where he has since established himself as a respected percussionist, composer, educator and band leader. As a composer, Adriano created the sound track for an animation movie based on the fairytale “The Little Red Riding Hood”, has composed for dance companies, and has worked with fine artist Monica de Miranda on the sound installation “Do you hear me”, presented in Lisbon 2007. At the moment he is working on new compositions for two new theatre plays: Ballroom of Joys and Sorrows by Kate Flatt and MOJO from Theatre-Rites.
He has collaborated with several leading musicians including Bobby McFerrin,